None of this fancy sauce reduction bullshit. No cream. No whisks. No elaborate spices.

Pan-fried baby artichokes are legit. They'll make you look like a professional and they're balls easy to cook.  Three steps: Prep. Boil. Fry. The biggest difficulty you'll have is finding them at the grocery story and then convincing yourself to buy them.

Ingredients
Like most things on this site you can modify this recipe and improvise. Add heat (cayenne) Or Mint. Instead of "Prep, boil, fry," try "Prep, grill" or "Prep, fry." Add small pieces of bacon. Top it with Parmesan cheese. Do whatever.

Recipe
1. Prep: Clean, shuck, and slice
The first time I tried baby artichokes, I didn't listen to the instructions about peeling off *all* of the dark, thick leaves. I was greedy. I thought that leaving more leaves meant more of the artichoke to eat.

Nope. Mistake. Tough spiky leaves aren't that tasty... And instead of having more to eat, I had less, like, um, zero.


2. Boil
The goal here is to cook the artichokes just enough and therefore allowing you to easily crisp them in a frying pan.
3. Fry

*I have a habit of buying new shit at the grocery store and trying to cook it. That night, it was smelts. It was my first time buying smelts. I've since decided that I don't like smelts. 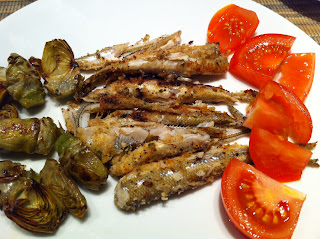