How to cook lobsters and not freak out the girl

If your date is from the Northeast, chances are good that she's going to love this idea and will support your latest cooking endeavor. However, even if she can tear through a pile of Chesapeake Bay Blue crabs with the best of them, in most cases, you're going to have to tread lightly. Cooking live lobster can be a delicate issue.

"Can you bring Old Bay to a lobster fight?"
But don't fret. Because who can really turn down indulging in lobsters on a patio during a cool evening in October? And if she's not willing to get dirty cracking apart crustaceans, there's not a single girl on Earth who turns down lobster mac n' cheese.....

So keep reading to learn about how to boil and steam fresh lobsters (it’s as easy as cooking pasta) but take note of three disaster possibilities:
Disaster Possibility 1: She's an avid pescetarian who gets outdoors, hikes, has a dog, and enjoys the occasional farmers market as well as a medium-rare filet mignon from time to time. However, SHE DETESTS KILLING THINGS. So surprising her with two boxes of semi-"awake" lobsters that you intend to boil to death will drive her away faster than fantasy football talk on a Tuesday.

Disaster Possibility 2: You freak out. You like crossfit, hit the trail sporadically, and can throw a spiral better than Rex Grossman on a good day. You feel pretty manly.

But if you've ever hesitated about squashing a spider in your house with just a napkin, you may freak out. Picking up a feisty lobster while your inner yogi is screaming at you for boiling (or steaming) a crustacean alive, may end your night, ahem, prematurely.

Now that you've made it through the disaster scenarios, let's learn how to cook lobsters

Ingredients:
The two easiest ways to cook lobsters are to boil them or to steam them. People say you can grill them (parboil then grill) but this just seems to risky for a novice. There will be a slight difference in taste between boiling and steaming, but if this is you're first time, you probably won't notice a difference.
Boiling Lobsters
Steaming Lobsters


The Maine Lobster Council website seems legit (because it says Maine and lobsters are from Maine) so go there for more information on cook times but also how to eat a lobster. 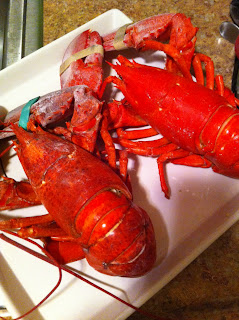 Email ThisBlogThis!Share to TwitterShare to FacebookShare to Pinterest
Labels: Recipes, Seafood, Tip of the Day