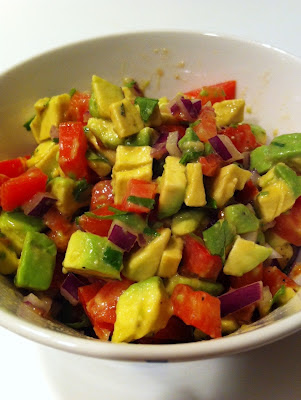 "Deconstructed" is such a foodie term.

So it pains me to title this "Deconstructed Guacamole" but "Chunky Guac" or "Unsmashed Guac" or "Ran-out-of-time-to-smash-it Gauc" just didn’t have the same ring.

I love eating outdoors (except in the DC humidity of July and August, and the winter months of December and January, and the rainy month of April) BUT when it is pleasant, there's nothing better than fresh appetizers and a cold crisp beer with sitting on a balcony with good company.

And naturally "deconstructed" guacamole is a perfect outdoor-balcony dining candidate.


So grab a bag of scoops, a sixer of Coronas, and follow this recipe below:

(Disclaimer: it’s been a month or two since I made this so I am guessing on the measurements based on the photo I took. But remember, most cooking dishes don't need to be an exact science)

Serve with scoops.
Posted by Matt at 2:54 PM

Email ThisBlogThis!Share to TwitterShare to FacebookShare to Pinterest
Labels: Recipes, Side Dishes, Tip of the Day