I think I'm addicted to Kale.  Not angry birds addicted (although I've never played the game1) or iPhone-at-a-red-light-to-play-Words-With-Friends addicted, but certainly somewhere in between. 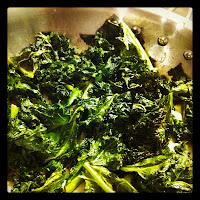 Now, I wouldn't recommend preparing your first attempt at kale to a date (it can be bitter and may require some trial and error).  However, unlike something like sea bass $17.99/lb, at $1.99/lb, you can screw up a few times (on your own) without wasting too much of your alcohol money.

In the past (pre-addiction), I'd usually sauté kale in a skillet with olive oil and sweet onions, but now I've started to bake it.  Kale is becoming a staple. On those off-nights of being a lazy, single guy who tries to hold on to the inklings of healthy eating - baking kale takes 2 minutes of prep, 35 minutes of cook time, and 15 seconds of skill (the skillet handle is hot you idiot).  Oh, and its hella healthy for you.

As usual, I'm late to the game and baking kale is really just "kale chips" but here's what I've learned:

You can get creative with seasoning the kale.  The standard recipe is:

The basic kale recipe lacked the edge so here are some adjustments I've tried:


1 One of my illogical (usually temporary) boycotts - like Wegmans (caved after 18 months) or flip flops with jeans (caved at some point) or Spotify (still holding out) or Google Reader (nope...).
Posted by Matt at 8:01 PM

Email ThisBlogThis!Share to TwitterShare to FacebookShare to Pinterest
Labels: Recipes